the Talmud Illuminated is now here, http://talmudilluminated.com/. It is complete, and you can read any page, as well as search. Daily updates are posted to Twitter: https://twitter.com/TalmudTweets 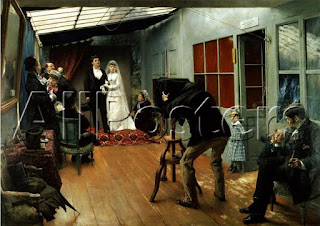 A woman can be betrothed by having relations with her, and there are two different ways to derive this, one from the words, “Woman who cohabited with her husband,” and another – from “If a man marries a woman or possesses her.”

Is there a practical difference between these theoretical derivations? – Imagine that ten men cohabited anally with a betrothed girl who is a virgin. According to the first way of learning, she is still a virgin after each act, since only the husband makes her a non-virgin with annal cohabitation, Therefore each man is to be punished by stoning, specified for violating a betrothed virgin. According to the second approach though, she is a non-virgin after the first act, and the next nine men are subject to a lighter punishment of strangulation.

Exactly what stage of cohabitation achieves kiddushin? Normally, for matters of infidelity and prohibited relations, the first stage of relations, member touching (discussed in another place) is considered the act. However, for kiddushin it is different. Since the man's intent is for complete penetration, he achieves kiddushin only when this is done. Practical difference? – Can he inherit his wife, or can he bury her if he is a Kohen.

Since there are two stages in a marriage, betrothal (dedication) and chuppah (bringing the bride into the husband's domain), a question may be asked: if one does betrothal through cohabitation, does it also effect the second stage of marriage – that is, is the second cohabitation or a chuppah still needed? After multiple arguments back and forth, it is concluded that cohabitation only accomplished betrothal, but a chuppah is still required.

Art: Wedding at the Photographer's by Pascal Adolphe Jean Dagnan-Bouveret 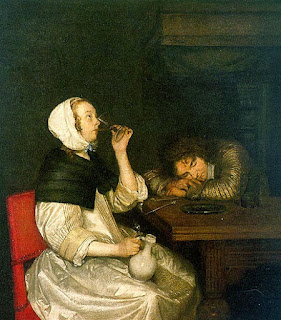 In order to become betrothed (which is considered like complete marriage, except that a chuppah is needed before the couple begins to live together), the woman has to accept a valuable proffered by the groom and tell him that with this she agrees to become his bride. Let us look at some marginal cases.

If a woman on a cruise takes the betrothal money (a hundred zuz, about $5,000) from the man but immediately throws it overboard the ship, she is not betrothed. But we just said it!? – You might think that – since she would be obligated to return the money if she does not get married – she actually means to accept, but tests the husband in his anger management. So the teacher had to tell us that she is not betrothed, because she did not voice an agreement.

Another example: a man was drinking in a bar, and a woman came over and said, “Give me a drink.” He said, “If I do, will you become betrothed to me?” She replied, “Do pour a drink!” – Here too she is not betrothed, since she agreed to the drink, not to the marriage.

In addition to money or valuables, a man can betroth a woman with a document, where he writes, “With this document you become betrothed to me.” This is derived from other laws of sales, and it applies even if the paper on which it is written is not worth anything. Just like a bill of divorce, this document must be written with her in mind.

Finally, one can engage a woman by having relations with her – provided that he announces to the witnesses that this is his intent, and then secludes himself with her. This is derived from the words, “who cohabited with her husband.” 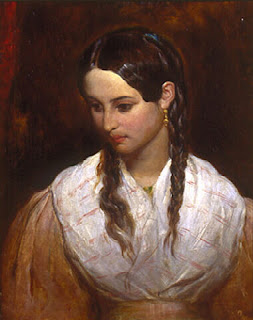 Earlier we saw one way to derive that marriage can be effected by giving the bride-to-be a ring or another object of value. However, it was based on taking the extra word “money” from a different place in the Torah, and applying it to our context.

A more direct way is to take the phrase “When a man takes a woman and has relations with her... if later he does not like her, he can divorce.” This clearly describes the situation of marriage, and uses the word “take”. The same word “take” is found when Abraham buys a field from Efron and says, “I gave you the money for the field, take it from me.” We thus see that “take” has a meaning of acquiring with money. 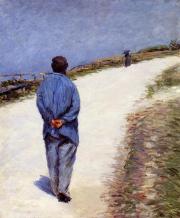 It is the way of a man to search after a wife, and not the other way around. This is similar to a person who lost a precious stone on a beach. Who searches after whom? Obviously, the one that lost his possession searches for it.

We mentioned that betrothal can be done with money. Why is that so? Furthermore, there is a related law that a father can give his daughter away in marriage when she is young, and in that case the money that the groom pays goes to the father.

Both questions have the same, if non-trivial answer. This is derived from the law of a Jewish slave-girl, here is how. The father can sell his daughter as a servant. In this case, it is understood that when she grows up the buyer will take her as a wife, or designate her for her son. If none of these happen, then she goes out free, and the Torah adds, “no money!” We already know that “free” means “no money”. So we understand that it is in this case that there is no money, but in another related case there is money. And when is it? When a woman gets married, or when the father gives her away in marriage.

That is exactly what we wanted to demonstrate, that the betrothal which will lead to marriage (chuppah) can be done with money.

Today both events happen under the chuppah in close succession: first the groom gives money (or a ring) to the bride, then the ceremony is concluded under the chuppah, which symbolizes the new home.

Art: Man in a Smock by Gustave Caillebotte 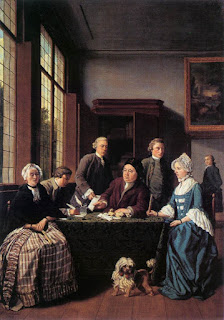 A wife can be acquired in one of three ways and she acquires herself back in one of two ways.

She may be acquired through money, document of betrothal, or cohabitation. Two witnesses are needed to testify in case of money and document. In case of acquisition by cohabitation (which is not encouraged) the witnesses testify to the declared intention and to the seclusion.

She acquires herself back through a Get or through the death of her husband.

Passive use of “she is acquired” as opposed to “he acquires” teaches that a woman can only be acquired willingly, and not against her will.

Some say that the Torah was written and given to Jews scroll by scroll, and later glued together. The proof comes from the words of David, “I say, I have come, it was written about me in the Torah scroll”. What does David mean?

Initially David had doubts if he could be a king, since he was a descendant of Ruth, a Moabite, and the Torah said that “Moav should not enter the Jewish people.” The loophole was that “Moav” was male, so females of Moav, that is Ruth, could enter – but not everyone agreed to it. However, later he found a hint in the worlds of the angel, who says to Lot, “Take the daughters found with you.” About David himself God says, “I have found David, my servant”. So David found a hint to himself in the Torah. But since he calls it a “scroll”, it means that it was written and given to Jews scroll by scroll.

Others say that it was written as a whole, since God tells Moses, “Take this book of the Torah”. What about the “scroll” proof? – The whole Torah is also called a scroll. But what about “this book” proof? – That is after it was glued together.

Furthermore, even though the Torah was written down, a larger body of knowledge was only taught from teacher to student and never written down. What is the proof? “Write for yourself these words” means that some words are to be written down, but “On the basis of these words” alludes to portions that are to be guarded and transmitted orally. Later on it was too hard for the people to remember everything, and even oral teaching were written down – and this it the Talmud. 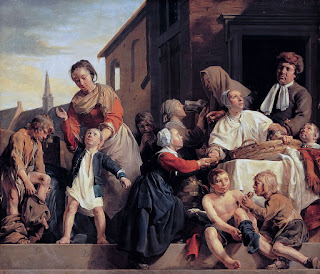 Young orphans may be hard-pressed to find sustenance. They may try to sell some of their land. But since all know that these children are not legally adults, and that when they grow up, they may retract and demand their field back, people may be unwilling to buy orphans' fields. Therefore the Sages changed the law here and allowed such sales to stand, even when the orphans grow up. At what age do young children acquire this right? -- Between six and ten, depending on their maturity.

In the synagogue on Shabbat seven people are called to read the Torah, and the first one should be the most learned. This law, however ancient and just, could lead to quarrel, and a new rule was adopted: the first one to read is a Kohen, and following him is a Levi. Afterwards a regular “Israel” Jews are called. In this way, people don't argue and peace prevails.

A similar law, established for peace in the society: if fish is caught in one's net, technically it does not belong to the owner of the net, because – if he does not hold the net – he has not acquired it in any of the accepted ways. Nevertheless, the Sages gave him the ownership, and now anyone else who takes the fish from the net is considered stealing it. Another law: gleanings in the field in Israel are left for the Jewish poor. Yet the Sages accepted the law that any poor who comes to collect them is permitted to do so – to prevent strife.

Art: The care of orphans By Jan De Bray 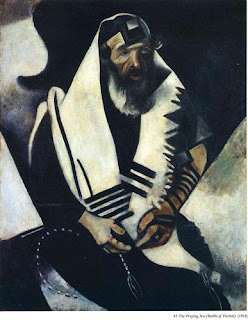 After the destruction of Betar, they recovered the teffillin worn by people slain there, and the total volume of these tefillin was forty boxes, each box being the size of a small mikveh, that is, about 25 cubic feet.

Jewish boys captured by the Romans were exceedingly beautiful. Initially, Roman used to look at a signet ring with images made of best gold when engaging in conjugal relations. Now they started using Jewish boys by tyeing them to the beds and looking at them at this time. One of the boys asked another “Where is this punishment written in the Torah?” The other replied, “Even blows that are not written in this Torah scroll will God bring on you.” The boy accepted the answer, but continued, “How far was I from this place in my studies?” - “A column and a half.” The boy concluded, “Had I come to this place myself, I would have understood it without you.”

In these times, many oppressors would seize land from the Jews. If later, when law became more enforceable, another Jew wanted to buy land back from the oppressors, this was praiseworthy, because then more of the Land of Israel would be in Jewish hands. However, he needed to consider that this land previously belonged